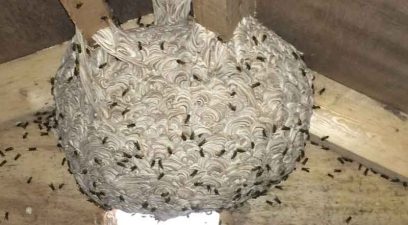 Why do wasps attack.

An aggressive wasp nest is not permanently aggressive, their mood can change dependent on the queen. Wasps appear to be calm when you see them going about their business in and out of the nest. However they can become very aggressive when they feel threatened. Their natural instinct is to protect the nest but what is it that directs them to turn?

Social wasps use chemicals to transfer information to create an efficient communication system within the colony. By using pheromones, they can coordinate their members in the various activities of the colony. This includes coordinating alarm and nest defence when they feel threatened.

Dealing with a wasp nest.

If anyone tells you they have a wasp nest and they are going to treat it themselves then get them to watch this clip first. Wasp behavior can change in literally seconds. A professional pest controller will be able to notice a change in behavior or even predict their behavior treating the nest. He can then allow for this Before treating the nest.

When I surveyed the nest in the clip I was aware of there busy activity and they appeared very volatile so I prepared for the treatment knowing they would get very aggressive very quickly and wanted to record it. As soon as I treated the wasp nest by injecting some powder I shut the window immediately and started to record. If that was someone trying to treat the nest it could of gone horribly wrong and that’s when people get seriously injured and even end up in the hospital. Why would you risk it and end up with the possibility of getting seriously injured? Get a professional in who knows what he is doing.

If you need advice on dealing with an aggressive wasp nest then Contact Us and we can help. Alternatively contact the BPCA who are the governing body for Pest Controllers.