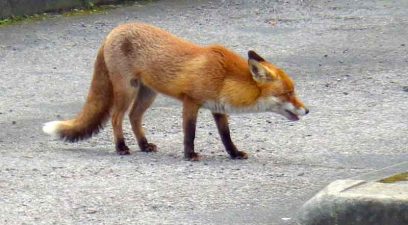 Urban Foxes control, they are very adaptable and In the opinion of many have become a huge pest problem in the towns of Kent such as, not only do they provide a health risk but they can be dangerous. Dealing with fox control is the non-statutory responsibility of the owner, occupier or manager of the property where the problem occurs. Urban foxes have firmly established residents and it is not surprising the population is on the increase if you look at the way we live today.

Foxes eat a wide range of food and our fast food culture produces a lot of waste food which supplies the Urban fox with readily available meals from the bins and other poorly managed waste sites. A third of an urban foxes diet is made up of scavenged waste food or food provided by a homeowner. The remainder of their diet is made up of fruit, vegetables, birds, small mammals, insects and reptiles.

What problems the foxes brings.

Urban fox problems are always going to be a controversial issue because in an urban environment you will have those that love seeing the foxes thrive as part of the urban wildlife and you will have those that suffer the consequences. They can leave terrible smells in your garden through their mess and can be very disruptive digging holes in the garden or under sheds and decking to build their den. There is also the issue with the bad press the urban fox receives about attacks which creates fear among the general public. A worry of leaving the back door open on a hot summers day or letting out a small animal such as a dog at night. That is why foxes removal is so important.

Pest-Tech Ltd, take all these considerations into account when working out a solution to your problem. We can help protect you and your family from the risk of foxes. If you feel you have a fox problem and need help to carry out fox control or fox removal, please give Pest-Tech Ltd a call. There is no single solution to managing fox problems, which is why it is best to get an individual site survey done to determine the appropriate course of action. Get in touch today for foxes removal.

Pest-Tech Ltd carries out a number of services for urban fox control and urban fox removal. There are few products on the market that you can purchase to keep foxes away so Pest-Tech Ltd looks at several areas such as improving the environment and carrying out fox proofing for decking, sheds and summerhouses. We also carry out permanent removal of the fox by humane methods.

It is very unfair to re-home an urban fox as all you are doing is passing the problem on to someone else and you can’t re-home an urban fox in a rural location as they don’t know how to live in the wild and will either head back to an urban area or die trying. With all this taken into account dispatching a fox is the best method to control. Foxes are not protected and are classed as vermin, this said there are clear guidelines on how foxes are dispatched and Pest-Tech Ltd follow these regulations to the full.

Some useful information about foxes.

If you have a fox problem then you can contact us to discuss what options are available. We are members of the BPCA demonstrating our professional services. We can support all foxes control