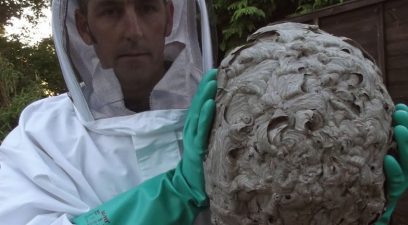 Wasp Nest Behaviour is directed from the queen and it can be aggressive. If it is a weak queen then the nest can die out and not survive the summer.  She controls the nest so it can go two ways, good or bad.

How the wasp nest grows.

It is about this time of the year that we start to see a change in wasp behavior.  Up until now the Queen wasp has been building her nest. Not physically but producing lots of female workers to go out and get the materials to build the nest (wood pulp).  Whilst they are doing this the Queen is busy laying thousands of eggs which turn into wasp larvae. Some of the workers are responsible for looking after the larvae. Others are responsible for going out hunting gathering soft bodied invertebrates, such as aphids to feed the larvae.

Wasps themselves do not eat the food but chew up the prey and feed it to the developing larvae.  The wasps live on a sweet excretion of spit produced by the larvae that is a sugar.  So as we get to the end of the summer time;  late August, early September the queen stops producing female workers and starts producing males and then Queens.

What makes wasps go crazy in the summer.

Once the Queen stops laying and there are no more larvae the workers loose their food source and have to turn to fruits such as apples and pears, normally found fallen under fruit trees.  This can be a problem as fermenting fruits contain alcohol so they can literally get drunk.  This is when the wasp nest behaviour will change. They will go to great lengths to get the sugars they need which is when they become very irritating and persistent around food.  They are hungry and want food and they will retaliate with a sting if they are prevented from reaching it.

Summary of the wasp

Wasps are not bad creatures, if you think about it, they are survivalists.  They are only ever worried about expanding their nest and defending it but also looking after their young.  If that’s not survival then what is?