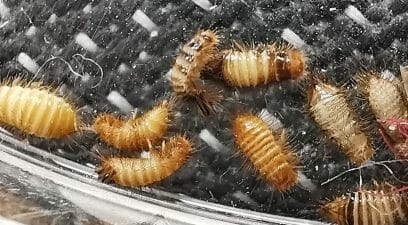 Pest-Tech carries out a carpet beetle treatment when we find an infestation breaking out during a pest survey. The problem is not the beetle, but the larvae which are known as woolly bears. In this blog I am going to use a case study from a recent job we completed in Maidstone.

Carpet beetle can be introduced to the home by simply flying through an open window in your house. They are attracted to fresh cut flowers, but nesting birds can also introduce an infestation. Carpet beetle head for natural light so you do find them dead on window seals. This can be a sign that you have a problem. They are small in size and have a vibrant blue and brown wing case. Their actual name is Variegated Carpet beetle and the larvae are a textile pest so they eat natural fibres such as fabrics and wools.

We were called out from a customer who had two treatments from a different pest control company. Although two treatments had been completed they were still finding larvae crawling about. Originally it was throughout the house but now it was just in the kitchen and bathroom upstairs. A survey was carried out and found the the areas still experiencing the problem were linked by a small loft space. This had been missed during previous treatments so needed checking. On looking inside woolly bear cases were found all in the insulation and there were two old wasp nests in there. A wasp nest is made of wood pulp and therefore a natural fibre and food source for woolly bears.

We removed the insulation and the two wasp nests from the small loft area and bagged it up. The area was then hoovered up and a spray treatment completed to deal with any stragglers in the area. On inspecting the wasp nest outside afterwards the nest was completely infested with larvae. This was no doubt the source of the problem and would have continued to house the infestation cycle of carpet beetle.

If you have a problem with carpet beetle then Pest-Tech can help. We carry out a survey and try to identify the problem as well as carrying out an effective treatment. For more information visit our Carpet Beetle page. Pest Tech are members of the BPCA.