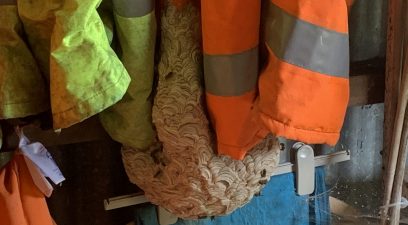 When we carry out wasp nest treatments we are often asked about the life cycle of a wasp. To help you understand what occurs I have written a short blog. The wasp life cycle has a few key stages which I aim to explain in more detail:

A single-mated queen emerges from hibernation in the early spring. She establishes her nesting site in a cavity. As she builds her nest the cells are constructed, and she lays an egg in each one. At this stage the wasp nest is the size of a golf ball.

After about 30 days of the queen looking after her young, her first offspring of workers emerge as adults. They are all female at this point. The workers take over the foraging, brood care and nest building and maintenance duties. The queen then stays in the nest and her job is to lay eggs to build the colony.

After a few days, the larvae will hatch from the newest eggs. The adult workers bring insects back to the nest to feed to the hungry larvae, which offer a sugary food supply to the workers, via a process called trophallaxis. The larvae grow over a couple of weeks before they spin their pupal cap and pupate.

Over the summer months, the colony will grow, with thousands of wasps, depending on the species. Once the colony is big enough, the queen will switch to laying a sexual brood: these are males and the sexual females capable of becoming next year’s queens.

Wasps Mature And Leave The Nest

When the sexual brood matures, they leave the colony to mate. They find somewhere to hibernate over the winter such as a loft space or warm area. After this stage, the nest has done its job. The workers are still alive with no brood to feed them. This is when they start to bother you.

If you have seen any of the stages above then you may have a wasp nest. If you want further info visit Wasps. We carry out wasp nest treatments and can help you. Stay safe and use a professional to deal with any wasps nests you may have.

Great service. Pest controller had great knowledge and explained everything he was doing. Went above and beyond.

Eradication of Rat Presence in Back Gardens

Highly recommended should you need to source this service.

We have been using Pest Tech for years and have never looked back. Kelly has done a brilliant job of removing any unwanted pests we had in the past and preventing any new “tenants” from entering. We know we are in safe hands and would highly recommend his professional, reliable and friendly service.