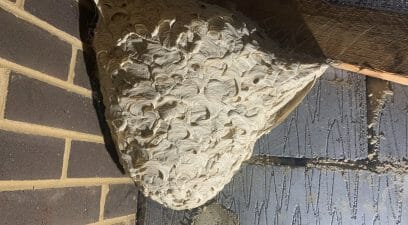 Throughout the summer months, wasps cause havoc among innocent homeowners with their aggressive nature. Identifying a wasp nest in it’s early stage is often your quickest and safest chance to remove it, but how do you know if you have a wasp nest?

Removing a wasp nest is extremely dangerous without experience and training. Therefore, we recommend you leave the job for a professional pest control company like Pest-Tech. If you suspect you have a wasp nest in your home, call us on 01622 296055, we’ve completed 1000’s wasp nest removals in Maidstone and Kent.

But first, you probably want to identify the early signs of a wasp nest or want to know if you have a wasp nest in the first place. We will be covering the following points during this article:

What are the signs that I have a wasp nest?

As we move into May, we find ourselves at the early stages of the wasp nest season. It can be challenging to identify a wasp nest so early, as you won’t get a mass of activity, but you will get a small amount. You may have your suspicions, but how can you identify if you have a problem with limited activity?

The first thing is to be vigilant, as wasps tend to use the same flight pattern to a known food source. So over the following weeks, you’ll gradually see more and more wasps.

If the nest is in your house or building, you will see a constant flow of wasps leaving and returning and more often than not, they will be using the same entrance.

During the early stages, a wasp nest will be around the size of a human hand.

The easiest way to spot signs of a wasp infestation is to look out for the actual nest.

For example, if you notice wasps using a regular flight path into your shed or roof space, you may be able to locate and identify the nest. However, it is essential to understand that getting close to a wasp nest may result in being stung, so please be careful.

The nests themselves are a feat of engineering; it amazes me how they can build such a structure. The nest starts the size of a golf ball, as shown. It usually’s wood colour as they build it by chewing wood and making it into a pulp; this is then used to form the nest. As the colony grows, so does the nest and the queen is busy producing female workers.

Where would I find a wasp nest?

The most commonplaces our technicians find wasps nests are as follows:

Wasps are attracted by light

Our team often receive calls from customers noticing signs of wasps gathering around lights. This usually happens in attics or lofts when lights are switched on for the first time in a while. If you’ve noticed this, there is a high chance that you have a wasp nest in your loft.

Furthermore, if a plumber or electrician is in your home and needs to access the loft, you’ll soon be made aware if there is a wasp nest. British Gas’s policy is to not go into an attic if it has a nest; that includes old dormant nests, so they must be cleared or treated before entering.

Preventing wasps and their nests

If you’re worried about wasps nesting at your property, you should look to prevent the problem before it occurs or in its early stages. You can do many things at your property to stop wasps from becoming an issue.

For example, simply keeping your windows and doors secure by closing them. This can be extended by installing fly screen doors which will allow you to keep doors open during the summer months.

Next, your bins are a huge attractant to wasps looking for a quick and easy meal. Make sure to close your bins and keep them secure on your property.

Finally, if you spot the early stages of a wasp nest, you should act straight away. Wasp nests, when caught early, are easier and less costly for our team to deal with. They are only the size of a hand and can be removed in minutes.

Getting rid of wasps yourself

Although we never recommend getting rid of wasp nest yourself, we’re aware that the abundance of DIY equipment can make it tempting. So here are our tips to keep you safe if you’re considering it.

When removing a wasp nest, wasps will release a chemical to call for help. Due to this, you need to wear PPE equipment such as a bee suit. A sting from one wasp may not be harmful to most, but a sting for 20+ angry wasps defending their nest will be.

Professional insect sprays and insecticides are only available to certified pest controllers; therefore, don’t waste your time or money with DIY insect spray. Instead, while wearing PPE equipment, place a bag over the nest and remove it by hand; make sure the bag is sealed and dispose.

We often get call outs for wasps that are buzzing in large numbers around bushes such as laurel. It’s not because there is a nest there, but the wax on the leaf creates a suitable bonding material for the nest and is usually a good feeding ground for insects. Unfortunately, there is not much we can do in this situation as there is no nest to treat.

What do I do if I have a wasp nest?

No matter the sign of a wasp nest you have spotted, you need to be very careful to look after yourself because wasps will sting if they feel threatened.

Anaphylactic shock is known to kill if it is not treated, so we recommend that if you have a wasp problem, call our experienced wasp nest removal team on 01622 296055.

We hope this has helped establish the early signs of a wasp nest so you can act before the nest becomes a problem. If you want more advice or would like to book a treatment, contact us or visit our wasp nest removal services in Maidstone.