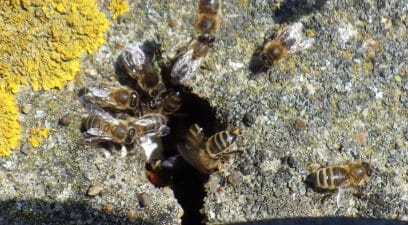 The difference between Bees and wasps. As we move towards March Pest-Tech gets many phone calls stating that they have a wasp nest that needs treating, when in fact what they actually have is a honey bee nest. Bees are endangered and we should be looking to save them, as they do so much for the environment. This article will help you identify which insect you are dealing with by pointing out some differences between bees and wasps. We will cover the following:

The UK’s home to over 200 different species of bee! But, for now, we’ll keep it simple and deal with the main two types you’ll see, these are the honey bee and the bumble bee, which we’ll be talking about in more detail in future posts.

The main difference between a wasp and a honey bee is that the honey bee is hairy with lots of fine hairs on their back and body. A worker honey bee also has pollen sacks on their rear legs for when they are gathering from plant to plant.

A honey bee nest is normally found in avoid such as a cavity wall, under tiles on the side of a house or the most common one is the chimney. They will build their nest to fit the space they have however they do outgrow a space, and this can be one of the reasons for them to swarm. Honey bees in a chimney are so common as there is so much room for them to grow so a good place for them to set up home. If you have an open fire and notice a swarm entering your chimney, the best immediate action should be to light the fire as this may move them on before they have a chance to set up home and start building honeycomb.

Once again there are many different variants of bumblebee such as the white-tailed bumblebee or the red-tailed bumblebee. This article isn’t going to go into the details of the different species, as all we need you to do is identify that they are bumblebees to assist us if we are coming to remove them.

Bumblebees are very easy to recognise as they are mostly black and fluffy with yellow stripes and different colour tails. Their size varies with some being very large, but you normally get a mix of different sizes in a nest. The most common way to identify that you have a bumblebee nest is that on a warm day the males buzz around the outside their nest. This is most commonly at the roof’s gutter-level because they have nested in the insulation in your loft. They are also known as crawlers, as they will walk up to 2 meters to get to their nest.

Bumblebees are extremely placid and don’t want to sting you as they will die after, so they have to be in extreme danger to use their sting. That said they will defend their nest if they need to so don’t start prodding and poking a nest. They do sometimes build nests in unusual places such as the ground, bird boxes and cavity calls with an access hole.

Wasps, without a doubt, are aggressive and even look aggressive with their bold yellow and black striped body.

Unlike bees, they don’t have hairs and the yellow on their body is a lemon yellow so contrasted against the black really stands out. Unlike bees they also don’t tend to buzz around the outside of their nest, you just see a constant flow of wasps coming and going with purpose. Wasps start appearing around June or July time and go on till November however there are always some exceptions. Early in the season all the workers are small in size and get bigger as the season goes on. Commonplace to find a wasp nest would be in the loft and if you turn a light on in the loft with a wasp nest in it then they will buzz around it.

The European Hornet is very unmistakable due to its size, they are about an inch in size and although they are very intimidating with the noise they make, they are not as aggressive as wasps. Their bodies are brown with yellow stripes on their abdomens, their legs are brown, and they have two very prominent antennae on the top of their heads. They look very evil, but they are not in comparison to the wasp as mentioned before. Hornets are very much attracted by the light, so if you have a hornet’s nest close by you might find them flying into a window and due to there size this may be quite frightening.

There is another hornet that is starting to make an appearance in this country and that’s the Asian Hornet, a comparison between the two will be a topic of a future blog however if you make a sighing and you are not sure then you should report it as Asian Hornets are not good for our honey bee populations and can wipe out a swarm of bees in days.

Hopefully, this has given you enough information to be able to identify whether your problem is with bees or wasps, in order to help us to offer a solution to your pest problem. Whether it be rehoming a swarm of bees or destroying a wasp nest we aim to give you a solution on how we can make the area safe. Please look out for the future blogs I mentioned and remember always use a professional to deal with the problem safely.

Need to call in the experts?

We specialise in the treatment of Wasps and Bees nests. Click here to get in touch.