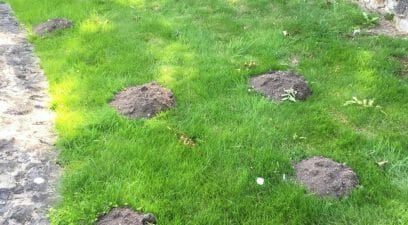 Environment of the Garden Mole

The Garden mole is found all over the UK but strangely not in Ireland. This blog is designed to give you facts and information about the common garden mole. The blog will cover the following:

They are present in most environments where there is an adequate depth of well-drained soil to allow tunneling. They are most common in grassland and deciduous woods. You will also find them in organic gardens where there are high populations of earthworms.

They are uncommon in coniferous forests, on moorlands and in sand. This is probably because their food is limited. Moles are thought of as animals of open land, but in fact they prefer to live in deciduous woodland.

Food Source of the Garden Mole

Moles sometimes collect and store worms alive in special chambers. The stored worms are immobilised by a bite to the head segment. Food is either actively dug out of the soil by the mole or more often collected from the floor of the tunnel. Many soil animals fall through into the tunnels. Moles rarely forage above ground, mainly in times of drought.

Life Cycle of the Garden Mole

Males and females are solitary for most of the year, occupying exclusive territories. At the start of the breeding season males enlarge their territories, tunneling over large areas in search of females. The main breeding season is from February to June. The female rears a litter of 3 or 4 naked babies, the young weigh only 3g when born. Their fur starts to grow at 14 days, eyes open at 22 days and they are weaned at 4-5 weeks.

The young start to leave the nest at 33 days and disperse from their mother’s range at 5-6 weeks. They are fully grown by 8-9 weeks. At five weeks old they are completely self sufficient and are driven from their home territory by their mother. When the young moles leave they either take over old tunnel systems or establish new ones of their own.  For a while they may live above ground until they find a vacant area where they can excavate their own tunnel system.

Dispersal takes place above ground and is a time of greatest danger. It is during the time above ground that they often fall prey to owls, rats, weasels, stoats and foxes, while badgers will readily dig them out of the ground.

Most moles don’t live beyond 3 years but can live up to 6 years. Their main predators are owls, buzzards, stoats, cats and dogs but vehicles and humans also kill many.

Moles create extensive systems of permanent and semi-permanent tunnels. They can move their own weight of soil every minute. Surface tunnels are usually short-lived and occur in newly cultivated fields, in areas of light sandy soil and in very shallow soils, where prey is concentrated just below the surface.

Most common is a system of permanent deep burrows which form a complex network hundreds of metres long at varying depths in the soil. This may stretch for 1000m or more. There will be a system of permanent tunnels about 30-60cm below the surface which are unlikely to be detected from above. It is the shallow, feeding runways which trouble gardeners.

The only time an adult mole will come to the surface is to collect leaves and grass to build its nest. This will be located under a larger than normal mole hill known as a fortress. The deepest tunnels are used most in times of drought and low temperatures. Permanent tunnels are used repeatedly for feeding over long periods of time, sometimes by several generations of moles.

Within the tunnel system moles construct one or more spherical nest chambers, each lined with a ball of dry plant material. Nests are used for sleeping and for raising young. Moles have poor eyesight but are sensitive to the slightest vibration disappearing quickly underground. For his size, he is one of the world’s most powerful animals.

If you want to know more or wish to book an appointment about your mole issue then Contact Us.