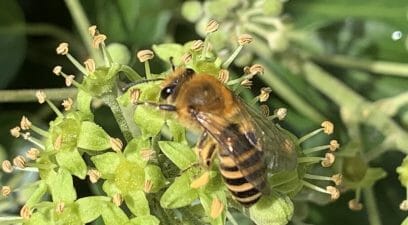 The Ivy Bee Friend Not Pest

The ivy bee is a new species of bee in the UK. It arrived in the country in 2001 in the south and it is slowly spreading up the country. Its scientific name is Colletes Hederae. Their activity starts in the autumn and that is when we start getting calls. People think that this bee is a pest and want it eradicated. The fact is, this bee is completely harmless and should be left to go about its business.

This blog has been written to give you more information about this bee. Its all very well me saying its harmless but this wont stop worry or concern. This blog will cover the following information:

The Ivy Bee is bigger than the honeybee. It has a densely haired ginger thorax and distinct broad orange/yellow striped abdomens. Their size and banding separates them from similar species. The male is slightly smaller than the female.

This insect gets its name from the fact it predominantly feeds on the nectar of Ivy flowers. They will also visit a variety of late blooming flowers. the ivy flower comes out in the Autumn like the bee so there is lots of food about for them. The picture shows an ivy flower.

They are known to nest in large and densely packed groups, thousands of nests in a small area. These mainly occur in garden lawns and flower beds in loose soil. They can also be found in allotments. They like south-facing slopes of sparsely vegetated and bare earth. Some call it the Ivy Mining Bee as they make there nest in the soil. They are a solitary bee so they live a loan, one bee per hole.

This species of bee are entirely harmless. The general concern when our customers see all the bee activity is getting stung. The males do not have a sting so are of no concern. The females have a very small sting, similar to a weak nettle sting. Although they have a small weak sting they are very reluctant to use it. This makes them a safe bee to have around. To prove this I often pick them up to show how safe they are.

Now you know a bit more about the bee you should now realise you are safe around them. They are no threat to you, your family, children or animals. They are good pollinators and good for the garden so we always recommend leaving them. You can still mow the grass or dig the flower beds in the garden.

If you have any questions or want more information on bees then contact us.