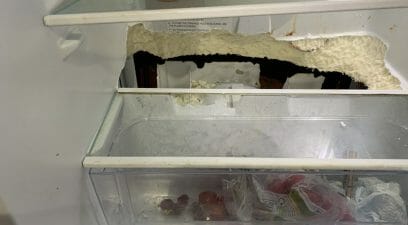 How Do Rats Get In The Kitchen.

Recently we were called out to deal with rats in the kitchen of a property in Maidstone. On arrival I got a brief off the daughter, rats had been seen in the Kitchen. They didn’t know how they were getting in. The first thing we do is carry out a survey, we try to identify the route of entry. Also what and where are they going as this may also help determine the route of entry. The rats had been under the kick boards of the kitchen units, there was also insulation there which would normally be found in a roof void. Clue number one.

Rats in the kitchen fridge.

There was also gnawed bits of foam and yogurt pots, which I thought was strange but made me look in the fridge. I was completely surprised with what I found, a rat had almost gnawed the back of the fridge off. This was obviously their food source, but more disturbing was the occupants were still using the fridge for their food.

Rats in the drains.

Knowing that rats use the cavity wall to get about and that there was insulation under the kick boards I now needed to set about finding the route in. There was drainage for the sink that went through the wall so there was a possible route into the kitchen. I also had not checked the drains so I lifted the drain cover outside the back door. I needed to rule the drains in or out so I baited the drain to see if there was any activity. There didn’t appear to be any activity from what I saw but bait take would tell me if rats were in the drains at this property.

Rats in the roof.

If the rats were not using the drains then somehow they would be getting in from ground level. I had already walked round the house on arrival looking for any possible routes. This could be a broken air vent or an old waste pipe hole not filled in, but they were all good. I new the rats had been in the roof void of the flat roof. With this in mind it was time to investigate the flat roof.

The roof was in good order, I noted the next door roof was lower than this one. I also noted the timber was rotting away on the side of the extension of the property. Looking even closer I also saw some pieces of insulation on the floor and hanging down from the timber. Putting my hand it the gap it was evident that the insulation had a large gap big enough for a rat to get in and out. So now I had my route into the house.

It was my guessing that the rats had used the overhanging hedge to get onto the flat roof. Having spoke to the occupant I was informed that rats had been seen before trying to get food from the bird feeders. They hadn’t been seen for a couple of months because they stopped feeding the birds. With this information I could deal with the rats in the kitchen and leave the bait in the drain to rule it out on the next visit.

The following visit I had removed the rats. On inspection of the drain the bait was untouched so that ruled out the drain for point of entry. A builder had now been recommended to do some improvements and renew the wood. It was job done for me and a happy customer with no more rats in the kitchen.

Pest-Tech is a professional company and member of the BPCA. If you want information on our services, then please contact us.

Rats in the kitchen